“...Meg’s thorough lyrical groundwork is evident in the elegance and pragmatism of the message she illuminates with each song... ” 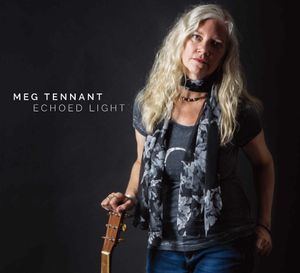 Our lives roll on as the light shifts between the seasons.  From full band to intimate acoustic arrangements, Meg Tennant's latest album "Echoed Light" offers up some hope, comfort and clarity.
Co-produced by Meg and Toronto roots rocker Mark Ripp, this album has a full, warm sound that settles in around Meg's voice, and carries the listener along through a northern winter break-up (Silence & Snowbanks), a contemplative walk through the woods (Let's Walk This Road), some encouraging words (Not Done Yet), and the loss of a loved one (Shine a Light on Us).

"...The songs, most of them recent, pulse with the ideology of perseverance that Meg brings to all of her stories..."  —Paul Corby, Roots Music Canada

"...This sweet-voiced artistically mature singer-songwriter might come as a revelation to many...Meg's voice manages to sound both girlish and world-weary at the same time.  And there are some beautiful songs here."  —Roots Music Canada

"Co-produced by Tennant and roots rocker Mark Ripp, the album captures the warmth and honesty of Meg’s voice and the production compliments the smooth, articulate writing style that has become the trademark of Meg Tennant’s music....I now have this CD 'Echoed Light' on repeat, it's that good."
-Cash Box (Canada) & Record World (USA)

Originally from Northern Ontario, Canadian folk-roots songwriter Meg Tennant has moved back and forth a few times between Ontario and BC, and is currently based in Vancouver.  She has performed at festivals and showcases in both provinces, and has opened shows for the likes of Eliza Gilkyson and Tom Russell at Vancouver's Rogue Folk Club.
(See full bio here)

"Bucket of Love" - currently being performed by choirs in BC, Australia and Sweden.
"Buddy's Back" - recorded by bluegrass artist Tammy Fassaert, produced by John Reischman
"Under the Sun" - recorded by roots and ragtime band My Sweet Patootie.
"Arizona" - on compilation album Grrrls With Guitars, Vol.2
"It Made Her Cry" - on compilation album Helping Hands, West Coast Artists for UNICEF
"Driving With You" - best song of the month in 2004 on Songwriter Universe.
"Mama Sang 'The Wren'" - 7th place in 2010 Indie International Songwriting Contest.
"Maker of Marimbas" - honorary award in 6th annual Great American Song Contest.

For inquiries, or to book Meg Tennant for festivals, house concerts or events (solo, duo, trio or band), contact Meg by email:
MegTennantMusic@gmail.com